“Partisanship, Fascism and the Common Good” 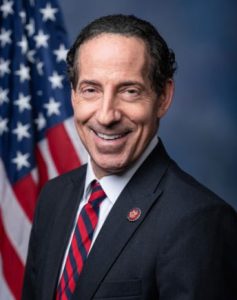 Following unforeseen circumstances in January, the rapidly proceeding insurrection attempt at the Capitol and ensuing impeaching proceedings, Congressman Jamie Raskin (D-MD) was unable to give his scheduled presentation at our previous All Society Platform on January 31st. However, we are thrilled to announce that he will be joining us for our next All Society Event on March 28th at 11:00 am EST!

The event is co-hosted by the Baltimore Ethical Society. Rep. Raskin will be introduced by BES Leader Hugh Taft-Morales who lives in the Representative’s neighborhood in Takoma Park, Maryland.

Congressman Jamie Raskin (MD-8) was Lead House Manager in the second Senate impeachment Trial of former President Donald Trump, which ended with a 57-43 vote to convict and was the most bipartisan presidential impeachment process in U.S. history.  A professor of constitutional law, bestselling author, and former Whip of the Maryland State Senate, Raskin has been on the frontlines of defending democracy against authoritarianism in our time and authored the successful House Resolution calling on Vice-President Pence to activate the provisions of the 25th Amendment after the failed coup of January 6th to prevent any further descent into chaos and violence at the hands of Donald Trump.

Raskin introduced the Resolution adopted overwhelmingly by the House (386-3) in the first week of December in 2020 calling for release of all religious prisoners on earth and for repeal of all nations’ blasphemy, apostasy and heresy laws, which involve imaginary offenses and are notoriously used to oppress and persecute innocent people.

Rep. Raskin is co-chair of the Congressional Freethought Caucus which he co-founded with Rep. Jared Huffman (D-CA).  Raskin came to the attention of freethinkers nationally when he testified in the Maryland State Senate in 2006 against a proposed constitutional amendment to ban same-sex marriage and answered a right-wing Senator who asserted that the Bible “defines marriage as one man and one woman” with this retort: “Senator, with all due respect, when you took your oath of office you put your hand on the Bible and swore to uphold the Constitution. You did not place your hand on the Constitution and swear to uphold the Bible.”